Wholesale gua sha tools as a professional gua sha tool company. For more than ten years, we have developed innovative ways how to create pretty and healthy natural products, making us one of the most reliable tiger eye stone gua sha tool manufacturing experts in China.

Along with our many other gua sha stones, we make wholesale gua sha tools using only natural materials of the highest quality. They are available in various designs, sizes, colors, and caps, among others. They are not only suitable for facial gua sha but other body scraping as well, including Bian stone, obsidian gua sha,xiuyan jade gua sha and more.

As one of the leading tiger eye gua sha manufacturers in China, we guarantee you that we will create the best design for your business. We offer free samples to give you the confidence that our gua sha stones are high-quality, durable, and safe. Contact us today and enhance your brand’s image with us! 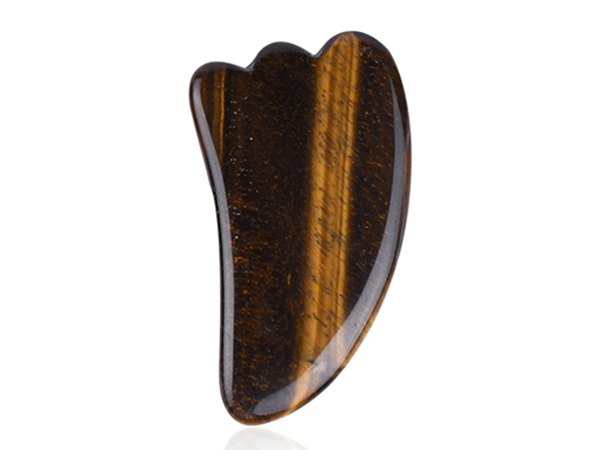 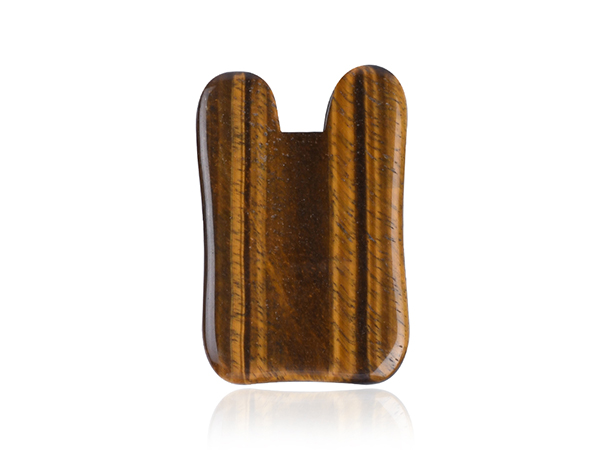 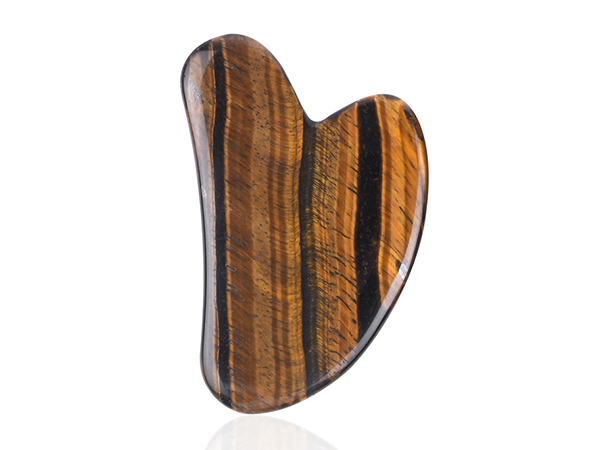 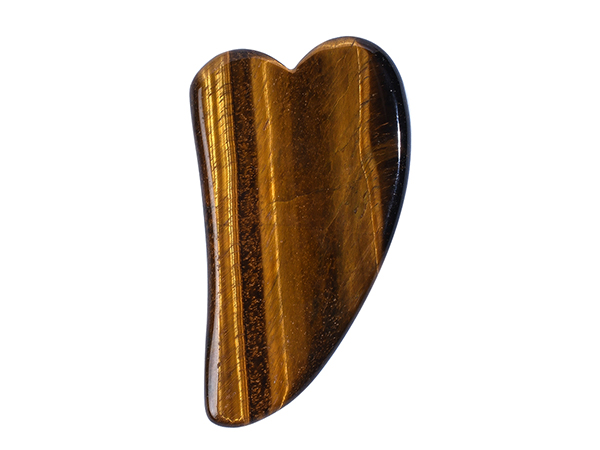 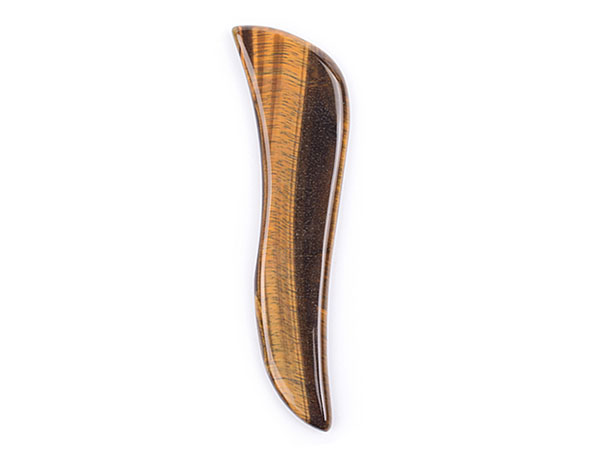 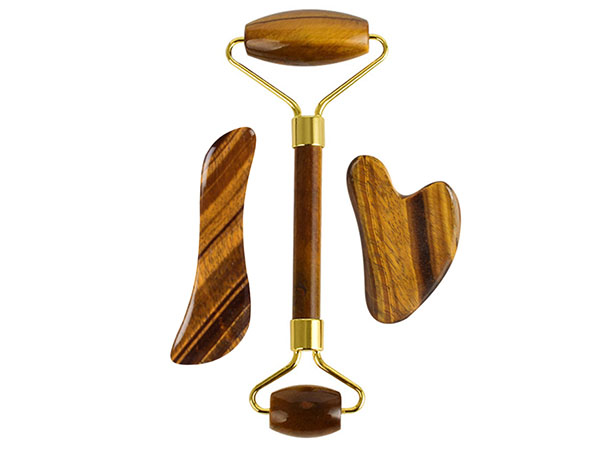 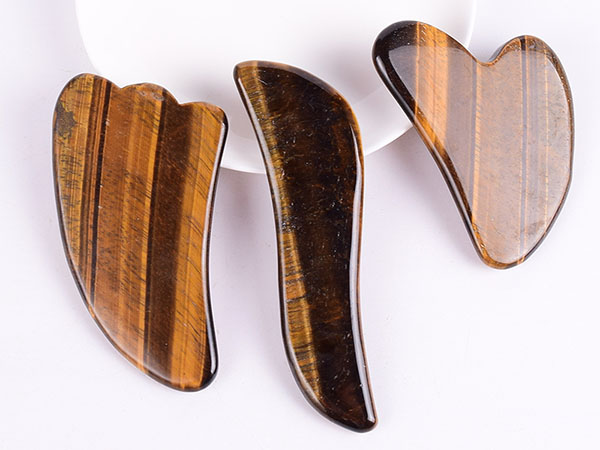 You can put the natural tiger eye stone in the fridge for 10mins before using it to keep it more relaxed on the skin; this will help reduce morning puffiness and refresh the skin. 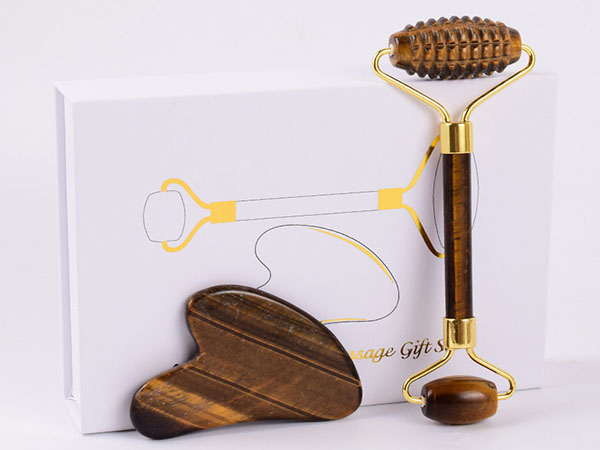 Made of 100% natural tiger eye stone, quality well and easy to clean and disinfect. It can work great on the neck, face, back, hand, wrist, shoulders and foot. Offer you complete massage therapy.

Tiger eye is another quartz gemstone with the same specific gravity, hardness and lattice structure as crystal. Because it contains asbestos fibrous tissue, and this asbestos fiber exists in the transparent quartz in a parallel layered structure, it can directionally reflect light, resulting in a “cat’s eye effect.”

However, it has a different principle for the cat’s Eye from the opal. Opal is due to the dense needle gap inside, and Tiger’s Eye is due to the existence of asbestos fibers.

This difference is reflected in the color and luster, which makes the Tiger’s Eye with a mercerized luster. When the angle of the gemstone is changed, yellow and brown stripes on the background of the mercerized luster can be seen correspondingly changing and intertwined, like a tiger pattern.

The chemical composition of Tiger’s Eye is called siliceous wool, and its beautiful yellowish brown color is caused by the presence of limonite (iron hydroxide). If the silicified stone wool does not contain limonite, it will show the true color of crocidolite, blue-blue, which is called green Tiger’s Eye. Some tiger’s eyes show blue-black and yellow-brown interlaced stripes, which are called mixed-color Tiger’s eyes or mixed Tiger’s eyes.

If the yellow-brown Tiger’s Eye is heat-treated to convert the contained limonite into hematite, the Tiger’s Eye will appear red. Oxidation treatment can also decolorize Tiger’s eye stone and turn it into a yellowish or grayish color similar to opal. Then, these light-colored Tiger’s eyes can be dyed into red, black, green, blue, purple and other colors through dyeing treatment. The dyed Tiger’s Eye is easy to fade, which needs attention.

Almost all Tiger’s eye stones are produced only in South Africa and very little elsewhere. However, South Africa’s production is very large, so the price of this beautiful gemstone with a rich mercerized luster and cat’s eye effect is not high.

Tiger’s Eye is a very common, inexpensive gemstone that is seen in both China and Japan as having samurai qualities that enhance courage.

There are also blue and red Tiger’s very popular eye stones. The infiltration of crocidolite forms Tiger’s eye stone into quartz, and crocidolite is a variation of blue amphibole.

When the blue asbestos interacts with the iron element, it will form a yellow luster, which becomes the Tiger’s eye stone we generally see.

However, a mutated blue tiger’s eye stone is also known as “Hawkeye.” If it contains a lot of iron oxide, it will turn red and become a red tiger eye stone, which many gem collectors love. Because of the infiltration of bluestone wool, Tiger’s eye stone will form brown and black stripes, emitting a light similar to cat’s Eye, but it is still quite different from the real gold-green opal. In India, the Tiger’s Eye also represents power and wealth.

In Japan, it is often made into ‘gouyu’ and the power left by the great gods. It can exorcise evil spirits and has the magical power of breaking them. It is very popular among the public for happiness.

In China, the tiger eye stone is regarded as the skin favorite of tigers. Gems made of hair can protect the health and safety of children. Tiger’s Eye belongs to the sum of trigonal and monoclinic minerals. It has the trigonal crystal system function to concentrate energy and clean up negative energy, and the monoclinic crystal system can quickly replenish energy.

Vibrational power that brings gentle healing is ideal for those who often feel a lack of confidence or compromised self-esteem. Tiger’s Eye brings self-confidence and back the core of one’s life, healing those wounds that have been forgotten but continue to affect oneself.

For those who can’t get the energy to work or just want to escape from life, Tiger’s Eye clears blocked negative energy and helps rebuild it, replenishing any lack of strength.

Yellow Tiger’s eye stone can make people who are tired of life and work renew their spirits and face the difficulties and dissatisfaction of life. Putting the Tiger’s Eye Stone indoors can improve the fighting spirit to face the test.

Tiger’s Eye can also make people feel safe and willing to speak their true thoughts and bring the courage to know themselves and speak the truth. Yellow between the eyebrows can bring powerful positive frequencies, clear negative energy and trauma, rebuild energy, and create lively and healthy energy

Blue can help people see things as they really are and understand what’s going on in the spines of others.